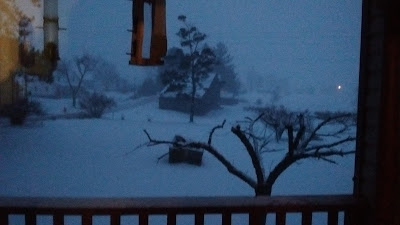 Good evening, friends! Having just finished Evening Prayer,  I'm sitting here in my Divine Office rocking chair, in front of my picture window, gazing  past the birdfeeders and out into the snowy evening.  I love snowstorms when I get to watch them from inside a warm house, especially since  there's no need to drive anywhere for the rest of the day on this Day of Rest.

I just found this question from a reader in the comments of an older post. I'll share and answer it here, since I bet this reader is not the only one who is puzzled. Here's the  question:


Daria,
I need an explanation.
Why does the MP Concluding Prayer in all three online breviaries no longer match the the Collect prayer from the day's Mass?
I thought they were authorized by ecclesial authorities to match . . .and for some time they did as I recall. Now it seems that the online sites have returned to matching the MP Concluding Prayer with what is documented in the breviary books and NOT the new/revised Collect Prayer from the day's Mass as approved for use in the 2011 missal. What's going on?

And now the answer.  Yes, the concluding prayers are authorized to "match" the Collect of the day's mass, when, and only when, the collect and the concluding prayer of  the Liturgy of the Hours are supposed to be the same prayer. And they are not  the  same prayer during MP and EP in Ordinary  time.   Here are the relevant explanations from the good old General Instruction for  the Liturgy of the Hours:

So, to sum up. The concluding prayer for Morning,  Evening, and Daytime prayer is identical to the Collect of the day's mass only during the various holy seasons, and also for any saint's day throughout the year. The concluding prayer for Office of Readings is that of the mass all year long.   Eventually, when the revised translation of the English breviary is complete, you will see a change (i.e. an  improved translation, similar to what we had for the Roman  missal) in the concluding prayers in the four week psalter as well. But that is a few years down the  road.