I was travelling yesterday and so unable to mark the Solemnity of the Annunciation with a post, but I hope this lovely psalms and prayers of this feast were in your heart and on your lips yesterday.  I was able to do all the hours in my car, thanks to my ipod and the the podcasts from DivineOffice.org, a real godsend for commuters.

It's funny--and a tad embarrassing--that after all these years of praying the LOTH, and having read through the General Instruction of the Liturgy of the Hours numerous times, and having written a book that  purports to show lay people how to pray it in accordance with the instructions--I just learned that I'd been doing something wrong all this time.

Worse yet, if I'd only paid attention to the helpful notes at the beginning of the day's prayers at ibreviary.com, instead of skipping to the psalmody in the smug confidence that I knew what I was doing, I could have learned about this a while ago.

Saints memorials during weekdays of lent are always optional memorials(also known as commemorations) This I knew. And indeed, unless it was a saint I was especially interested in, I often made the use of the option to pay them no heed and just go on with the office of the lenten weekday. So far so good.

But should I have wanted to commemorate ,a saint on a lenten weekday, I'd do what I always did for saints during ordinary time: said the office of the day, but substituting whatever saint-specific elements appear for that saint in the Common of Saints. This is often no more than the antiphon for the gospel canticle and the concluding prayer.

But during lent, that's wrong! No saintly substitutions allowed!

I know. That sounds strange if you haven't been doing it. But there is it. Here's the relevant part from the general instruction:


237. On Sundays, solemnities, and feasts, on Ash Wednesday, during Holy Week, and during the octave of Easter, memorials that happen to fall on these days are disregarded.
238. On the weekdays from 17 to 24 December, during the octave of Christmas, and on the weekdays of Lent, no obligatory memorials are celebrated, even in particular calendars. When any happen to fall during Lent in a given year, they are treated as optional memorials.
239. During privileged seasons, if it is desired to celebrate the office of a saint on a day assigned to his or her memorial:
a. in the office of readings, after the patristic reading (with its responsory) from the Proper of Seasons, a proper reading about the saint (with its responsory) may follow, with the concluding prayer of the saint;
b. at morning prayer and evening prayer, the ending of the concluding prayer may be omitted and the saint's antiphon (from the proper or common) and prayer may be added.

Now, there are exceptions to this. If a saint is the patron of your church, your diocese, the religious order or organization you belong to, or I think, by logical extension, a personal patron for you, you may on a lenten weekday celebrate his or her day as a feast, using the proper of saints and even the relevant common for the office.

So there we are.

Should have posted this sooner, but...don't forget to begin the solemnity of St. Joseph with Evening Prayer I today.
Posted by Daria Sockey at 5:33 PM 19 comments:

We Can Do This! Laetare! New Hymnal!

Laetare Sunday is nearly here, marking the halfway point of lent. Time to reflect on how your lent has been going, tweak your prayer, penance and almsgiving routine, and rejoice (that is what Laetare  means) that we are a little more than halfway to Easter.

This morning's Office of Readings had one of my favorite psalm verses: How blessed the people who know Your praise (Ps.89:16) That's us, folks. We are the lucky ones who know that perfect praise can be offered numerous times daily to our Creator and Savior. Perfect, not because we are, but because the Word of God with which we praise is perfect, and the One Who praise the Father with us and in us (that's Jesus) is perfect.

For those of you who wish to sing/chant the traditional, official  breviary hymns that come from the Roman breviary, I've found another lovely hymnal that, although less comprehensive than the Hymnal for the Hours that I reviewed at length a while ago, it has its own charms.

The new hymnal I refer to is the Lumen Christi Hymnal from Illuminare publications. This would be the ideal hymnal for a church that regularly provides Liturgy of the Hours services for its congregation. It's a slim volume overall--nice for those of us whose wrists ache from some of the hefty monstrosities  currently in most pews. Every one of the hymns is traditional, beautiful,and  easy to sing. You won't find anything written after 1965 here. No fickle melodic lines that can't make up their mind what key or time signature they want to be in. No tunes that are reminiscent of Broadway show tunes or pop hits.   But what I really like is the second half--gregorian chant hymns for lauds, vespers, and compline. All translated into English, and all on the modern five-line staff, so much easier for those who read music or teach themselves a song by plunking it out on a keyboard. There are hymns for weekdays and Sundays in every season, plus additional ones for many saints feasts and also for commons of saints.   There is only a single choice for each day (rather than the many choices as in the Hymnal for the Hours) but in some ways this works in its favor: I don't waste time considering which hymn to use but just do the hymn that is given. I also notice that these choices usually correspond to the second hymn given for lauds and vespers on ibreaviry.com.

So if you like the idea of chanting the official hymns for morning and evening prayer, check it out.

Welcome new readers Shannon, Patti, Racheal, Peggy, Robert, Catherine,  Maryann and Mischa! Glad to have you here. Free free to comment and especially to ask any questions about the Liturgy of the Hours by commenting on any post.

And that applies to the rest of you. How's lent going? Are you faithful to your committment to praying the Divine Office? Is anything  about the breviary confusing?   Let me know.


Please say a prayer for a wonderful priest who died yesterday. I met Fr. Gerard Steckler, S.J. in the summer of 1979. He was chaplain for a "Studies in Catholic Culture" program held in Spain.   Father Steckler was the one who introduced me to the Liturgy of the Hours, prodding me (and all the other students) to join him for Night  Prayer in the chapel each night.    The beauty of these particular psalms, combined with the Nunc Dimittis and the "Into thy hands, Lord" responsory grabbed my imagination at once. Night Prayer's message of setting aside the cares of the day, repenting our sins, surrendering to the mercy of God for our life and our death made me realize that this was the perfect way to end each day.  Within the next year I'd added morning and evening prayer, embarking on a journey of liturgical prayer that has continued to this day. 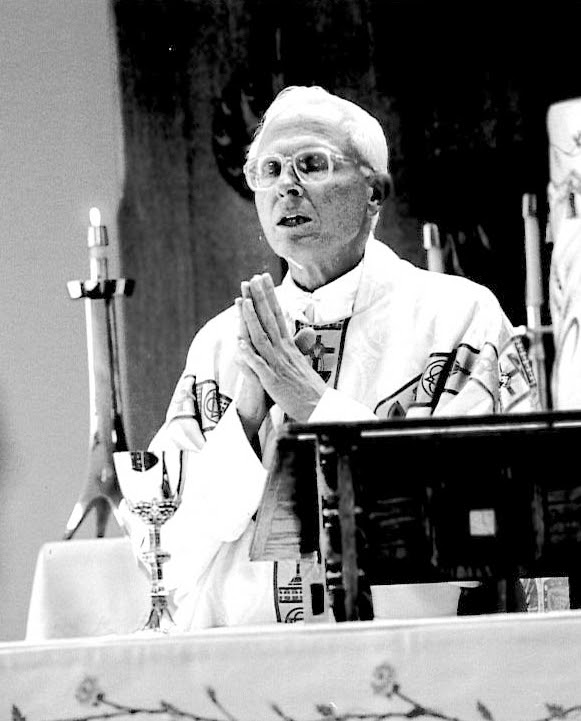 Fr. Steckler came into my life again when he became a chaplain at Thomas Aquinas College in the 80s, while my husband worked there for a ten year stretch. He baptized two of our children. He was a wonderful confessor, spiritual director, and preacher. His sometimes scathing wit helped many of us to not take ourselves too seriously and  to accept suffering with a grin (if we could) as a necessary (and deserved) part of our earthly lot. He was fond of puctuating his comments on society by saying, "There's no hope!",  yet with a smile and a twinkle which told us that a great Hope lay elsewhere.

Coincidentally, Msgr. Charles Pope has a post today about Compline/ Night Prayer. It's worth checking out.