A reposting of last year's homage to  today's solemnity.
The liturgical hours for the Nativity of John the Baptist contain a string of antiphons which, read straight through, provide in themselves an excellent devotional on the conception, birth, and mission of the "greatest man born of woman".  The antiphons for tomorrow's vespers reminded me of why there is a traditional custom of lighting bonfires on this night: John was like a brilliantly shining light, says the third antiphon. Not to mention the daily repeated Benedictus where Zechariah, the prophet of the prophet, calls his little baby a light to reveal You to the nations.


Of course, the bonfires predate the Baptist. It's one of those pagan customs co-opted by the Church when she co-opted Midsummer Night, exorcising its demons and baptizing whatever was harmless merriment. Now that the mighty prophet John owns June 24th, we can safely laugh at demons, fairies, leprechauns, and the other assorted lower classes of fallen angels thought to inhabit forests, rivers, meadows, and underground caves.  Hence the fitness of Shakespeare's comedy, A Midsummer Night's Dream.  In this story, fairies take advantage of the power they have on this night to inflict magical love spells on hapless mortals who fall into the crossfire of a dispute between the King and Queen of the fairy kingdom. The redeemed can safely laugh at such things, since they have no reason to fear them. 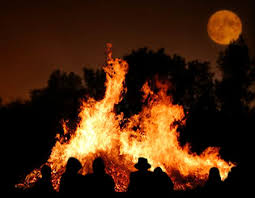 Weather and zoning law permitting, light a bonfire tonight   in honor of St. John the Baptist. Otherwise, grill your dinner and tell your children the meaning of those lesser flames.
And don't miss Augustine's sermon in the Office of Readings.(check it on the ibreviary gadget on the left; click office of readings and scroll down to second reading.) I love his humble disclaimers that his thoughts may be unworthy of the dignity of this feast, but that the Holy Spirit within each listener will help him make the most of it. Better still is his illustration of how John belonged to both old and new testaments: As a representative of the past he is born of aged parents; as a herald of the new era, he is declared a prophet while still in his mother's womb.

I wonder if this tiny pre-born prophet has been designated a patron of the pro-life movement?