Greg and Baz - a lesson in Friendship 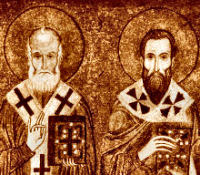 Today's saints share a feast mainly because of  their great friendship. Both are doctors of the Church; we have several readings coming up from each of them in the next few months. But today we get a lesson from Sts. Gregory of Nanzianzen and Basil the Great that is not theology at all. When Gregory gave this eulogy  of his friend, he probably didn't even think of it as a teaching on Christian friendship. He was simply reminiscing about his dear friend Basil and the good old days at Athens U. But what a fantastic model for friendship it is! Look how Gregory built up Basil's reputation to others at school:

I sought to persuade others, to whom he was less well known, to have the same regard for him. Many fell immediately under his spell, for they had already heard of him by reputation and hearsay.
What was the outcome? Almost alone of those who had come to Athens to study he was exempted from the customary ceremonies of initiation for he was held in higher honor than his status as a first-year student seemed to warrant.

And how they treated the inevitable competition among students to achieve top honors:
The same hope inspired us: the pursuit of learning. This is an ambition especially subject to envy. Yet between us there was no envy. On the contrary, we made capital out of our rivalry. Our rivalry consisted, not in seeking the first place for oneself but in yielding it to the other, for we each looked on the other’s success as his own.

Scholar Milton Walsh, author of Witness of the Saints, says that on the topic of the Holy Spirit, Gregory was the deeper theologian of the two.  Yet Gregory always credited Basil as the source of his own teachings. Today's second reading helps us see that these two are not just considered saints for their theology, but because of their holiness; their heroic charity.

We'll hear more from St. Gregory of Nanzianzen on the feast of the Baptism of Jesus (Jan.12), and two days after that, we'll read an excerpt from Basil's Rules for Monks.

Perhaps we could best honor these two saints today by making contact with an old friend whom we haven't spoken to in a long time. Right now I"m thinking about my best friend from high school. Unfortunately I don't know how to reach her, but I think I'll say a rosary for Maureen  today.
Posted by Daria Sockey at 10:03 AM