A Famous Catholic and the Breviary

I was reading the published letters of a notable 20th century Catholic this morning, and came across this quote from a letter that she wrote to a friend who had recently converted to the Catholic faith:

Oh. I am sending you a rather garish looking book called A Short Breviary which I meant to get to you when you came into the Church but which has just come. I have a 1949 edition of it but this is a later one, supposed to be improved but I don't think it is. Anyway, don't think I am suggesting that you read the office every day. It's just a good thing to know about, I say Prime in the morning and sometimes I say Compline at night but usually I don't, But anyway I like parts of my prayers to stay the same and part to change. So many prayer books are so awful, but if you stick with the liturgy, you are safe.

Can you guess who it was? You can tell she is a woman who does not  shy away  from expressing a negative opinion. I'll make this a multiple choice question. Was it:

I happen to own a copy of the 1954 edition of A Short Breviary,(Liturgical Press) the gift of James I. McAuley, who reads this blog sometimes. It's a nice, little, almost pocket sized book. Here are a few pictures so you can decide whether you agree with the above author that is it garish. 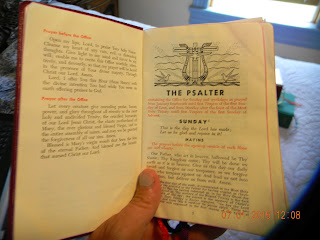 This of course, is the Divine Office from before Vatican II, translated into English for use by laity and active religious who were not canonically bound to use the complete Latin office that Priests and monastic orders used. I go to this book at times to compare today's breviary with the old system,  and also for the lovely short footnotes that explain the scriptural context and messianic meanings of the psalms. These were written by Fr. Pius Parsch.

Okay, now for the identity of the author I quoted above. Let me know if you guessed correctly. It is...drumroll...

Flannery O'Connor
The quote can be found in The Habit of Being, a collection of her letters.