A special Day for Breviary Lovers

It's the feast of St. Benedict, and if any sort of psalter, Office, breviary, or other book of daily liturgical prayer is an important part of your life, then you should consider him a special patron. It was St. Benedict, after all, who refined the already existing monastic custom of praying the psalms at regular hours throughout the day and night. Our breviaries today are all based, to great extent, on his system.

So how to honor St. Benedict?  That might mean saying his office today as a feast rather than a memorial--use the entire common of holy men/religious. Or use the following poem as a hymn today. You may sing it to the hymn tune known as Old One Hundredth, a.k.a. Praise God from Whom All Blessings Flow.

Below are pictures of a statue of St. Benedict taken in a church in Pittsburgh, PA last year. Note the detail shot of the raven at the bottom. Legends say that when monks who resented Benedict's reforms tried to feed him poisoned bread, a raven swooped in, grabbed the bread, and flew away with it.

So was this an angel in disguise, or a real raven "possessed" by an angel?

The sports teams at Benedictine University are known as the Ravens.

I like birds so this sort of trivia makes me happy. 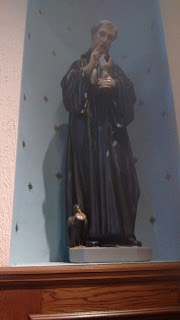 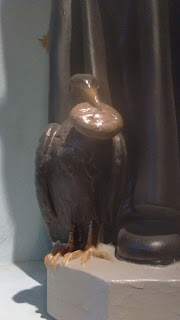 A bit of extra news. If you use Facebook, you might be interested in joining groups that are devoted to the Liturgy of the Hours.  One that I've recently joined is Liturgy of the Hours Discussion and Support Group. It's for those who use either the Liturgy of the Hours (1970) and/or any of the Anglican breviaries. The membership is enthusiastic and you will probably get prompt replies to your own posts.   Another group, which I've belonged to for years, is called Breviary and Divine Office Discussion Group. People on this group use all sorts of breviaries both pre and post-Vatican II, but it seems that those who comment most often are mostly enthusiasts of pre-conciliar breviaries. They are especially helpful if you are trying to learn how to use these and also how to locate books and apps for the same.

Of course, there's always Q&A here as well. I have several readers who are often faster at answering questions than I am, so even if I have been semi-AWOL these last few months, you are likely to get good responses to any questions here as well.