The Folk Mass as Museum Piece 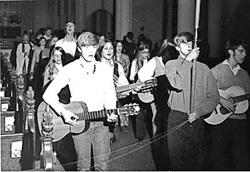 I just spend a highly ambivalent hour listening to audio files on this website, which is dedicated to 60s and 70s Folk Mass music and nostalgia. I am so happy that most of these songs are not heard in Church any more, and sincerely hope this website will not lead to their revival. On the other hand, you know how hearing the music of one's lost youth can bring back a tsunami of memories. Mine was for most part a happy and interesting childhood. Listening to these catchy little tunes brought back the sights, sounds, places, and people that populated my elementary  and high school years. Furthermore, I'll disclose that  in 8th grade I received a guitar for Christmas, taught myself  a dozen chords plus the ubiquitous DOWN-down, UP-up, DOWN-up strum pattern, and spent one semester as a member of the Mt. St. John's Academy (Gladstone, NJ) folk mass group.  A year later, at Villa Walsh Academy, (Morristown,NJ) I was struck by  the weird disconnect between the gorgeous  classical sacred music we learned in the school concert chorus (Bach, Palestrina, di Lasso, Handel) and these happy-clappy tunes that we  bopped to during the Eucharistic sacrifice. I quit the folk group, confining my  guitar playing to John Denver, Chicago, Orleans, Carpenters, and other decidedly non-liturgical music.

If any of you are between the ages of 45 and 65, you might enjoy listening  to some of these audio files, even if you are now, like me, a  traditionalist when it comes to liturgical music. A couple more thoughts, with which I don't mean to generate controversy. (I know that musical taste varies. I know people that have been moved to greater love of God by songs that make me ill, and that the music which moves me might leave some people cold.)  Anyway, my observations: