Wonderin' about Mundelein? (as in Psalter!) 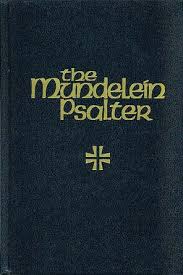 Anyone who is not interested in exploring the idea of chanting parts of the Divine Office should probably just skip this post. And I won't blame you. Most of you  here pray the  Office primarily at home, or maybe, for Morning or Daytime Prayer, at the workplace. By yourselves. The idea of singing or chanting any of is almost out of the question because: a. you don't have time to prolong the prayer by singing it b. you don't like to sing or don't feel comfortable having family members hear you sing or c. both.

For those of you who are still here--maybe you sometimes pray with a group after daily mass or at third order meetings and would like to explore the idea of singing/chanting. Maybe you'd just like to try some chant by yourself at home.  The General Instruction certainly hints, states, and beats the reader over the head with the idea that the psalms were written to be sung, and so this should be done if at all possible. I don't feel like looking up chapter and verse on this today, but just trust me, it's there.

But the breviaries that Americans have had to deal with since 1975 are not at all chant-friendly. They seem to be made for  recitation only. True, the one-volume has a section of psalm tones at the end of the mni-hymnal. And there are instructions of a kind. But try to learn a psalm tone and then flip over to your psalter and try to apply the tone to the day's psalm.Not having the music right there in the psalter is annoying enough to make one quite before one starts. But if you try it just the same,  it's sheer guess work trying to figure out while you are chanting which word to choose for your voice to leave the reciting tone and go to the other notes in the psalm tone. If you try to chant with a group, everyone will guess differently as to which word signifies a change to a new note, resulting in chant that does not have a unified, blended sound. Instead it's a musical train wreck.    I like to sing. I can read music and have an okay singing voice. But the Christian Prayer breviary defeats me and lots of other people.

Enter the Mundelein Psalter. (The name comes from Mundelein seminary, Chicago archdiocese). This is not really a psalter, but the equivalent of a one-volume breviary, with complete Morning, Evening, and Night Prayer for the whole year. It's intent is to reclaim the chanted office for Americans. But before I explain how it does that, I have to share with you some of the introduction by editor Fr. Douglas Martis. He captures the simplicity and marvel of the Divine Office with these words:


The deep, sober beauty of the chanting of
the psalms provides an oasis of calm and
peace in the often hectic and frenzied pace
of people today. And so, this volume does
not intend to offer anything flashy or
flamboyant. It does not boast of any
innovation; it does not introduce the next
fad. The Church’s prayer must be allowed
to speak for itself, to express the joy and
grief, the anguish and elation of God’s
children across the ages and around the
globe. This volume hopes to offer an
opening to the radical beauty of the JudeoChristian prayer,
in an accessible, comprehensible way. This, after all, is the prayer of
the Church.
This Psalter does, however, signal a
rediscovery in a way: it is simply the
Church’s prayer, not charged with any
political agenda, not aimed directly at social reconstruction. It harbors no hidden
motive of changing the world or the
Church or even ourselves, (these changes
occur by grace).  Its sole intent is to foster
fidelity in the praise of God by joining our
prayer to those of other cultures and
generations which offer the same sacrifice
of praise. The Divine Office is the expression of Church, the Body of Christ, at
prayer.

HOW DOES THIS WORK? There have been
many images used to describe what
happens during the singing of the Psalms.
The pace and rhythm of it can be likened
to waves that constantly wash over us with
the Biblical prayer, bathing us in the
images and emotions of the Psalms,
wearing a path in the stone of our hearts by
its constant, gentle force.


To me, these words along were almost worth the price of the book.

Tomorrow, I'll show you how the chant aids in the Mundelein Psalter work.