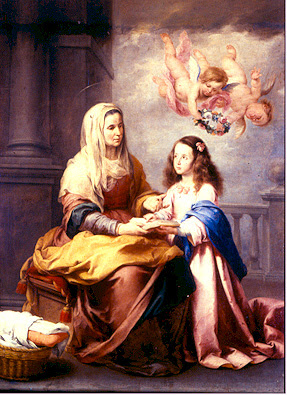 And also, the official hymn for today's feast, according to the Roman breviary.  You will find it in the Mundelein psalter, and also online at ibreviary.com (see widget on the right.)

The morning star will pierce the night,Then rosy tints of dawn appear,Announcing that the sun will riseTo bathe the world in luster clear.The Sun of Justice is our Lord,The Dawn is Mary, full of grace,Saint Ann the fair and gleaming star,Before whom ancient Law gives place.Saint Ann, you were the fruitful root,The tree that would salvation bring,By bearing her, the chosen stem,The Mother of our Lord and King.Most holy parents of the oneWho is our loving Mother too,With her, now pray for us who fall:Our pardon win, our strength renew.All glory, Jesus, be to youOnce born of Virgin undefiled,Who, with the Spirit of your LoveAnd God the Father, ever reign. Amen.


You will notice that St. Joachim doesn't get mentioned except for the "holy parents" reference.  Until  the Second Vatican Council, Joachim's feast was on the following day, July 27th.  Perhaps he once had his own hymn, but I have no time to research this possibility today. I'm sure however, that he does not mind taking a back seat to his mighty wife,Anne, who obtains  cures for people at her shrine in Quebec at a prodigious rate.


Our current American breviaries seem to contain far too many plain vanilla hymns, be they contemporary or of the more traditional type. It's true that the General Instruction on the Liturgy of the Hours allowed for substitution of hymns other than the official/traditional ones, but it seems that the American breviary went overboard with the substitutions. Here's hoping that the future revision of the breviary will include more of the kind of variety and poetic beauty of which the above is one example.