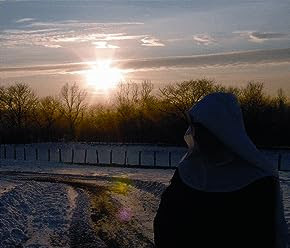 There are some items you need to have not for Christmas, but for Advent. For example, I'll be hunting for purple and pink candles this week.   Here's another item you will want to order it immediately, because  you know that if you wait, the thought will be washed away in the tsunami of December activity. Especially if you are a homemaker who must buy, bake,decorate, send cards,  wrap gifts and attend children's events, all the while making desperate attempts to fit in some extra spiritual activity. (At times I think the penance of lent is nothing compared to this.)

Advent Music
Okay. For the benefit of the readily offended: I'm not saying it's wrong to play Christmas music during advent. There's nothing like hearing a beloved carol to cheer us on cold, dark days. Listening to or singing sacred carols mindfully can be a form of prayer. I get it. But I like to try to approximate-- in my home-- the practice of the Church. So for the first three weeks of advent, at least, we don't play Christmas music at home. We only play advent music. (To which rule there are plenty of exceptions, for example, kids practicing for a recital or school program. And I know my kids cheat with their MP3 players and headphones, but the point is we are not blasting it aloud on the Bose until Gaudete Sunday.)

Now for years, this quirky custom of ours meant that anyone craving seasonal melodies was confined to putting various recorded versions of O Come O Come Emmanuel, which appear on many of our Christmas CDs, on “repeat track” until someone in the house shouted “Enough already!” That, and those tracks from Handel's Messiah which set messianic prophecy to music: Every Valley Shall Be Exalted; And He Shall Purify, And the Glory of the Lord. There were a few other suitable songs besides these, but you get the idea. It was a limited list which involved switching from one CD to another. True, there are a handful of “Advent lessons and carols” CDs done by magnificent Anglican choirs. And there is at least one CD of all Gregorian chant selections from the ancient liturgies of advent. Although the Anglican music is very pretty, much of it is unfamiliar, and for me, does not have that Advent feel to it. And, much as I like to sing Gregorian chant, and prayerfully listen to it at a sung mass, I somehow can't enjoy an entire long album of it as background music at home. It becomes monotonous since my Latin is not good enough to understand all the words as I listen.

So it was with great joy that I learned of a new, all-advent release titled Advent at Ephesus.  It's everything I'd hoped for, already having the 2010 Christmas at Ephesus in my possession.
The Benedictines of Mary, Queen of Apostles, are a young mid-western community living a traditional monastic life centered around the traditional (Extraordinary Form) mass and Divine Office. And that, dear readers, is the first thrill that comes when I listened to Although their voices are as lovely as  any professional performance choir,  knowing that these women are not just singing, but praying and intentionally seeking God's glory when they sing made listening to them a profound experience. Read all about the sisters here.
Thrill number two: the content. Sixteen selections: some Latin and clearly liturgical (Rorate Caeli, Creator Alme Siderum, Alma Redemptoris Mater) Others in English: carols with a folk song feel to them (Maria Walks Amid the Thorn, O Come Divine Messiah, Gabriel's Message) Most are polyphony (sung in harmonious parts) but there's just a few plainsong chant selections as well. And fear not, the essential O Come O Come Emmanuel is here too. Overall, the listener gets not only a sense of the variety of sacred song, but also, that ineffable unity of the spirit of Advent: a spirit of longing that is at once joyful (because the wait is nearly over), yet touched with impatience and sadness (because the wait has been long and lonely). Much the mood of a child longing for all the Christmas entails. Adults will feel this in the music of Advent in Ephesus.

Thrill number three: These consecrated women, who spend their lives praying, farming, and sewing vestments in rural Missouri, are gentle as doves, yet wise as serpents when it comes to producing a top-tier album. The arrangements of all songs was done by prioress Mother Cecelia, a former horn player from the Columbus Symphony Orchestra. She then secured the services of Grammy and Oscar winning producer Glenn Rosenstein, who came out to the prairie, set up a mobile recording studio, and in three days captured the sisters' performances for the rest of us.
The word of this pure, ethereal music plus it's flawless production values has already gotten out. Now Two days before it's 11/20 release, Advent at Ephesus already ranks an amazing #146 among all music CDs and #10 in classical music.
So get in line, quick! Before they're all gone. If you use my click through below or on the  top right picture  of the CD  I'll send the Amazon click-through-kick-back pennies to the sisters.