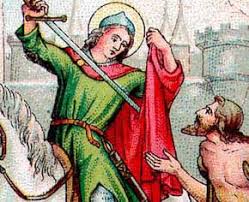 There's more to St.Martin of Tours than the cloak and  beggar story. We tend to obsess  on this event because: 1. It's a terrific story about serving Jesus in  the poorest of the poor, 2. It's a  cool story, containing a soldier with a sword, thus 3. the part of Martin's life we emphasize to our small male children. Unlike  the uncool parts about Martin turning pacifist and becoming a bishop.

But really, Martin was a pretty interesting  bishop. He managed to maintain a lifestyle of poverty even while he was a bishop. And when not involved in preaching,destroying pagan temples, combating heresy, and other bishop's business, lived in hermit-like seclusion, up on a cliff in the wilderness. That's something little boys could get into, I'm thinking.

Today's Office of readings contains an account of the end of Martin's life by his contemporary  Sulpicius Severus. Bishop Martin was visiting a remote parish with the purpose of conciliating two quarrelling factions of clergymen. While there, he fell ill and prepared himself for death. But his people would not let him slip away:

"Father, why are you deserting us?" they cried. "Who will care for us when you are gone? Savage wolves will attack your flock, and who will save us from their bite when our shepherd is struck down? We know you long to be with Christ, but your reward is certain and will not be any less for being delayed. You will do better to show pity for us, rather than forsake us."

Their tone strikes me as whiny. Trying to make their saintly bishop feel guilty for dying. Poor guy. He deserved better.

Moved by pity for his flock, just as he had been moved by the beggar years before, Martin put the matter before God, stating his willingness to remain behind if he was still needed. Fortunately for Martin, God stuck with the original program. Thus, says Serverus, St. Martin "left this life a poor and lowly man and entered heaven rich in God's favor.