Part 2 of my paean of praise to the Mundelein Psalter.

Moving past Father Douglas Martis' beautiful introductory essay about the Divine Office, which includes some basic instruction on how to read chant notation (using the do, re,mi method), we'll jump to the four-week psalter. Here is the the opening of Psalm 63: 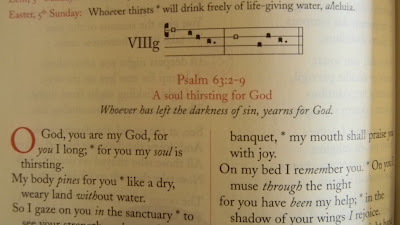 
Does that sound complicated? Or perhaps  you're  thinking, "But I can barely read regular music, much less Gregorian notes!"   Well, fear not!  The Mundelein Psalter comes with tech support. Go here and listen to an audio file to see how these notes should sound. Every psalm tone in the book--there's about 8 of them--can be accessed from this page. Just click on the "voice" option. Father sings the "Glory Be" for each tone.Once you've heard it a few times, it's not  hard to apply it to the psalms and canticles.

These psalm tones are very simple to learn and to sing. This is not like the more complicated Gregorian  chant done by a schola during an Extraordinary form mass (if you've ever been so fortunate as to hear that.)It's basic and repetitive. Chanting has two purposes: to slow you down just enough (compared to reciting) to help you savor the Word of God, and to add the beauty of melody. These psalm tones fulfill those purposes perfectly.

And I almost forgot--for people like me who read regular music but are confused by Gregorian notation, you can also download the psalm tones in modern notation.  Thanks to this support site, the Mundelein Psalter isn't just a book, it's an entire  system for learning to chant the Divine Office. It seems  that, unlike publishers of other  breviaries, the editor, composer, and publisher of the Mundelein Psalter was actually  thinking about us poor lay folk rather than just seminarians and postulants who can learn directly from the more experienced. They were actually thinking about us, struggling alone at home or with the tiny group that stays after daily mass to do morning prayer.  Amazing.

So, if you think you are being called to explore chanting the Divine Office, the Mundelein Psalter is well worth the price. ($50 new, $37 used on Amazon).

One more nifty feature of this breviary is the hymns, but I'll save that for my next post. I'll also list  the possible drawbacks of the Mundelein Psalter.