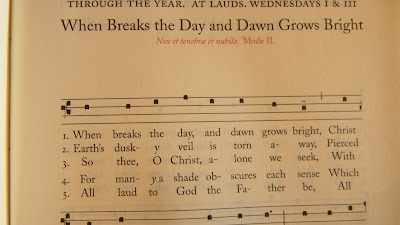 Reading the  General Instruction on the Liturgy of the Hours, I never quite "got" the statements made about the importance of the  hymn that precedes  each  hour. For example, "...more often than any other parts of the office the hymns bring out the proper theme of individual hours or feasts and incline and draw the spirit to a devout celebration." (GILH, chapter X section 173. )

I could never shake off the feeling that the the hymns were just something I had to get through in order to get to the "real" Office. Far from setting the theme for the prayer, the hymns appearing in my breviary  sometimes (not always) seemed to be stuck in there at random. Furthermore, other statements in the GILH hinted that there did exist a particular body of Latin  hymns in the official Liturgiam Horarium that had not made their way into English language breviaries.  I saw that many of the hymns in our breviary  were not  traditional pieces selected by the Church specifically for the breviary, since many of them were composed in the 1970s, and others are 18th century protestant  hymns such as we often use  at Mass.

Not that I found any of these hymns objectionable (well, maybe Suzanne Toolan's I Am the Bread of Life,
since it gives me flashbacks of bad folk masses from the 70s) but I just couldn't see them as particularly integral or necessary to the Liturgy of the Hours. So despite what it says in  the GILH, I tend to claim my layman's privilege to adapt the Office to my situation in life, and skip them.

So here is my last hip, hip hooray for the Mundelein Psalter. This breviary gives us English translations of traditional hymns in Gregorian melodic settings. At last  one can see the point of  the hymns. The ones  assigned to Morning Prayer all speak of dawn, morning, new beginnings, and how God dispels sin the way the sun dispels darkness. Evening Prayer hymns refer to sunset, endings, rest from the days' work and hope and resting in God's protection, both now and eternally. These English translations are non-rhyming poetry, resembling  in that way, the psalms themselves. They are poetic and doctrinal. Also, they all have a particular meter and rhythmn to them such that, if you don't care to learn the Gregorian melodies,(which you could learn from the audio files on the psalter's website) you could sing any of them to a more familiar hymn melody in 4/4 time,e.g. "Praise God from Whom all Blessings Flow" or "Creator of the Stars of Night".

Or just prayerfully recite them if singing is not your thing.

This about concludes my review of the Mundelein Psalter. In case anyone is considering buying one, I thought it only fair to clarify a few things: