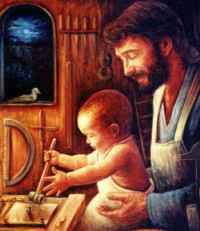 What an extra special St. Joseph's day,  with the inauguration of our new Pope, the nameday of our former Pope, and, as always, a nice little break from lent.

The Office of Readings has some lovely things to say about Our Lord's earthly Dad. Look:

In him the Old Testament finds its fitting close. He brought the noble line of patriarchs and prophets to its  promised fulfilment. what the divine goodness had offered as a promise to them, he held in his arms.

Now we can see how the last summoning words of the Lord apply to saint Joseph: Enter into the joy of your Lord...They convey not only that this holy man possesses an inward joy, but also that it surrounds him and engulfs him like an infinite abyss. 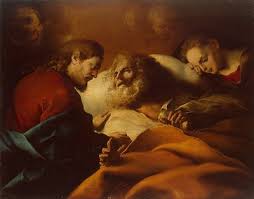 Now, I have a question. Maybe it's my current fever-induced fog, but I just can't figure it out. I see "Alleluia" in parentheses after each antiphon in the office of this solemnity. But, we aren't supposed to use the Alleluia during lent, are we? Even if it is a solemnity?  I mean, its not as if the Solemnity of St. Joseph would ever fall outside of lent. So...what gives?

Oh wait. I think I've got it. The same  psalms and antiphons may be used for the feast of St. Joseph the Worker on May 1st. Clearly, a day that is always during the Alleluia time of year.
Posted by Daria Sockey at 10:00 PM