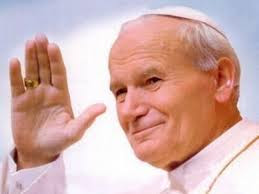 Thanks to alert reader Melanie of The WineDark Sea (great Mom blog) I'm putting in this 11th hour post of the texts from the new Office for Blessed John Paul II, whose feast is today. What you do is read the common of Pastors, with all the options that state "for a Pope".  Conclude each hour with the concluding prayer that is down at the end of this post.

From the Homily of Blessed John Paul II, Pope,
for the Inauguration of his Pontificate
(22 October 1978: AAS 70 [1978], 945-947)
Do not be afraid! Open wide the doors to Christ!
Peter came to Rome! What else but obedience to the inspiration received from the Lord could have guided him and brought him to this city, the heart of the Empire? Perhaps the fisherman of Galilee did not want to come here. Perhaps he would have preferred to stay there, on the shores of Lake of Genesareth, with his boat and his nets. Yet guided by the Lord, obedient to his inspiration, he came here!
According to an ancient tradition, Peter tried to leave Rome during Nero’s persecution. However, the Lord intervened and came to meet him. Peter spoke to him and asked, “Quo vadis, Domine?” — “Where are you going, Lord?”  And the Lord answered him at once:  “I am going to Rome to be crucified again.”  Peter went back to Rome and stayed here until his crucifixion.
Our time calls us, urges us, obliges us, to gaze on the Lord and to immerse ourselves in humble and devout meditation on the mystery of the supreme power of Christ himself.

He who was born of the Virgin Mary, the carpenter’s Son (as he was thought to be), the Son of the living God (as confessed by Peter), came to make us all “a kingdom of priests.”The absolute, and yet sweet and gentle, power of the Lord responds to the whole depths of the human person, to his loftiest aspirations of intellect, will and heart. It does not speak the language of force, but expresses itself in charity and truth.

The Second Vatican Council has reminded us of the mystery of this power and of the fact that Christ’s mission as Priest, Prophet-Teacher and King continues in the Church. Everyone, the whole People of God, shares in this threefold mission. Perhaps in the past the tiara, that triple crown, was placed on the Pope’s head in order to signify by that symbol the Lord’s plan for his Church, namely that all the hierarchical order of Christ’s Church, all “sacred power” exercised in the Church, is nothing other than service, service with a single purpose: to ensure that the whole People of God shares in this threefold mission of Christ and always remains under the power of the Lord; a power that has its source not in the powers of this world, but instead in the mystery of the Cross and the Resurrection.

So often today, man does not know that which is in him, in the depths of his mind and heart.  So often he is uncertain about the meaning of his life on this earth.  He is assailed by doubt, a doubt which turns into despair.  We ask you, therefore, we beg you with humility and with trust, let Christ speak to man.  He alone has words of life, yes, of life eternal.

O God, who are rich in mercy and who willed that the Blessed John Paul the Second

should preside as Pope over your universal Church,
grant, we pray, that instructed by his teaching,
we may open our hearts to the saving grace of Christ,
the sole Redeemer of mankind.
Who live and reigns with you in the unity of the Holy Spirit,
one God, for ever and ever.
]