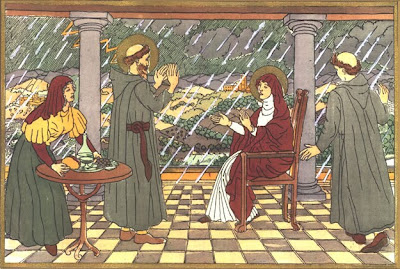 Don't miss the second reading from the Office of Readings today. It's the sweet, funny, and very satisfying story of holy twins Benedict and Scholastica. Benedict, the great founder of western monasticism, was meeting his sister in a guest house at the bottom of the hilltop crowned by his monastery. Scholastica, abbess of a female Benedictine monastery a few miles down the road (although they weren't calling themselves Benedictines back then), would meet her brother there once year. The two would enjoy a day of holy conversation, then at nightfall depart for their respective monasteries.

This time, Scholastica was enjoying her brother's company so much, that she proposed the two pull an all-nighter and not leave until morning. Benedict demurred: his holy rule stipulated that monks return to their cells every night. Scholastica felt that Benedict, as abbot, could certainly dispense himself just this once.

At this point, you can almost sense  of a friendly--but real--sibling spat heating up.
"Can not!"
"Can too!"
"Can not!"
"Can too!"
At which point, Scholastica went and told her Father about Benedict's intransigence.
God saw to it that Scholastica got her way.
St. Gregory the Great, who tells the story, explained ,It is not surprising that she was more effective than he; since, as John says, God is love, it was absolutely right that she could do more, as she loved more.
Several days later, Benedict was very glad that Scholastica kept him up all night. And his next action shows he had forgiven her for making him break his rule.
Read the whole thing on the ibreviary widget on the right,just click on Office of Readings and scroll down,  or read it here.