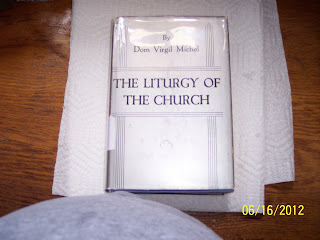 Virgil Michael O.S.B. and the League of the Divine Office, 1930s

Pope St. Pius X reformed the Divine Office, but how would that reform be effected, and who would bring this reform to the laity as Pius clearly wished? In England, a great deal of work was going on in the 1920 with the nuns of Stanbrook Abbey and Dom Fernand Cabrol, O.S.B. of St. Michael’s Abbey. In the United States there was Benedictine monk, Dom Virgil Michel, O.S.B. (1888-1938) of St. John’s Abbey in Collegeville, Minnesota. Dom Michel understood that the laity should pray the office, and yet he understood that the Breviary, as it stood, was not necessarily practical for most lay folks to use.

A few quotes from Dom Michel’s 1937 book, The Liturgy Of The Church:

“The Entire divine office, its daily recitation, rests upon the principle of the duty of the creature to give praise to its Creator. It is this principle that gives us the correct basis for the very existence of the divine office. All of us owe homage and glory to God . . .
The prayer of praise is therefore in a special sense a sacrifice which the member of Christ, as possessing a general priestly character, must offer up to God.”

Another point is that Dom Michel understood the importance of the vernacular. While there are those who can easily read, and prefer Latin, the majority of Catholics today do not, and that was a factor that Dom Vergil’s push for a vernacular breviary to open up the riches of the Divine Office to the laity. Dom Michel and his friend Msgr. William Busch (died 1971), both saw the Society of Approved Workmen praying the Office in 1932 and likewise, the Campion Propaganda Committee around the same time period. Busch in particular pushed the practice of the laity praying the breviary.

As a result, by 1936, St. John’s Abbey was promulgating The League of the Divine Office, a voluntary organization of lay people who agree to recite some part of the divine office every day. In my possession is an original brochure handed out by the Abbey regarding this League. Please note in the image that the full daily offices for Prime and Compline are provided as separate booklets. And note the Short Breviary – topic of the next article! In any event, the League is something that should be revived today. Any priest who runs a parish can take the scans of this brochure and pick up and carry on the good work of Virgil Michael and William Busch. 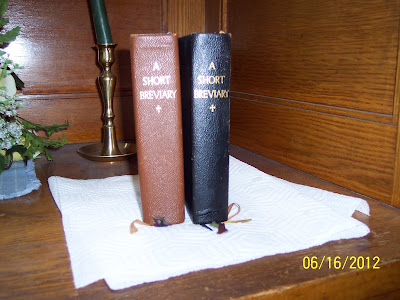