A continuation of a series on 20th century liturgical books that aimed to open up the Divine Office of the laity. By guest blogger Jim McCauley 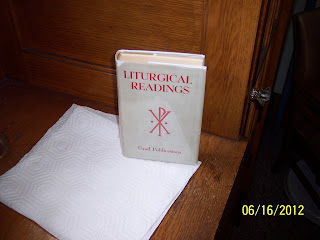 St. John’s Abbey was not the only American Benedictine Abbey with an interest in the Liturgical Movement. Another was St. Meinrad’s Archabbey in St. Meinrad, Indiana. Abbot Ignatius Esser (Abbott 1930-1955) also saw the need to open up the riches of the Breviary. However, Abbot Esser saw a lacunae in the Short Breviary – the rich Sunday homilies found in the Office of Matins were missing. As anyone who knows the pre-1960 Roman Breviary knows, the Sunday Office once had a third nocturn that contained the gospel of that Sunday, and then a patristic homily that explained the gospel. The other thing was that many of these readings were simply very difficult for those who were weak in Latin to understand. Abbott Esser had the readings translated into English. The Book was titled Liturgical Readings: The Lessons of the Temporal Cycle and the Principal Feasts of the Sanctoral Cycle According to the Monastic Breviary (1943). The untitled preface states:

“The present translation is dedicated to those men and women who are desirous of reading and meditating upon the words of the Fathers of the Church, but who have been hindered from so doing by an insufficient knowledge of Latin. In this translation the Latin idioms have been rather closely adhered to for the purpose of comparative study.”

The book was a success, and was kept in print through at least 1954. The book is especially valuable as it provides the readings for the octaves suppressed in 1955 –Epiphany, Ascension, Corpus Christi, Sacred Heart, Assumption, All Saints, and Immaculate Conception, as well as Pentecost, suppressed in 1969. Unfortunately, this book is rare today. Perhaps the publishers at the Baronius Press will use this as the basis for a supplemental volume to their new three volume Roman Breviary.

The images we have here is one of the front cover and another of the inside title page.