Breviary History #3- the League of the Divine Office 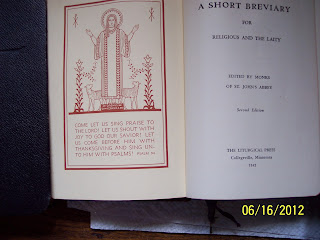 At the time of his death in 1938, one of the projects Dom Virgil Michel was working on was a condensed version of the roman breviary in the Vernacular. Dom Godfrey Diekmann O.S.B. (1908-2002) pushed the work along and the work received the support of the then Abbot of St. John’s Alcuin Deutsch, O.S.B. (Abbot of St. John’s 1921-1950). A key factor was that the Breviary would only be in the vernacular, and not in Latin. The Breviary was a simplified Roman Breviary, not the Monastic Breviary, though Monastic Compline was provided. The Vulgate Psalms were used in this first edition. Receiving its imprimatur in November of 1940, the first printing of the first edition came out in 1941 and quickly sold out. Further printings were done in 1942, 1943, 1944, 1945 and 1951. The volume was titled A Short Breviary For The Religious and For The Laity. Amazing, every copy of the first edition (in its various printings, confusing called “editions”) that have come into my possession were once owned by lay folks, men and women! Anyone who was associated with the League of the Divine Office in this era more likely than not used this Breviary. It was phenomenally successful, and I have found used copies from all over the Midwest and the northeast. Only one of the thirty plus copies I have seen over the years has been associated with a religious. All seem to be laymen, and, at most, possibly tertiaries. Please note that this was all before Vatican II, when the layperson was supposedly sitting dumbly in his pew, clutching his rosary, and not understanding a thing as to what was going on. In plain English, active participation in the liturgy by the laity was taking place well before the liturgical changes inaugurated by Vatican II.

Just how successful was this book? My grandfather, a Lieutenant Commander in the United States Navy, received a copy in 1944 and brought his copy out into the Pacific with him in 1944-1945. He used it faithfully. Many years later, in 1981 after his death, I inherited it, and I began to use it in September 1986. I used this regularly, on and off, had it rebound, until I finally replaced it with the Monastic Diurnal in the fall of 2009.

We have two images of the Short Breviary, one showing the Beuronese style front plate as it was in the 1941 through 1945. The 1951 shows the first piece of Brother Placid Stuckenschneider OSB (1926-2007) art associated with the Short Breviary.

The Breviary set in motion the great work of St. John’s Abbey and the Liturgical Press in regards to the Breviary, a work that should not be forgotten.